It began with “Picturegoer the Picture Theatre Magazine”, no.1 dated 11th October 1913. After 19 issues, the 21st February 1914 issue was re-titled as no.1 of Pictures AND The Picturegoer, and in 1918 they started issuing sepia printed photogravure postcards entitled “The Pictures Portrait Gallery”  [to be called PPG forthwith!] . All 101 are addressed “85 Long Acre London”, but cards 1–42 are printed in black, cards 43-101 in brown. 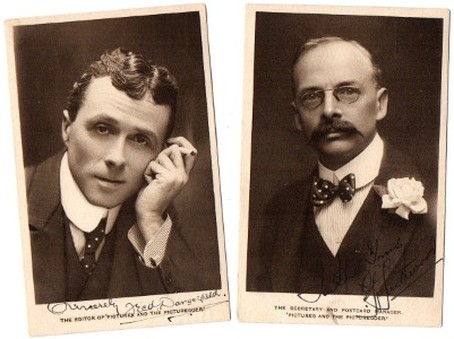 These unusual Elwin Neame postcards must also date from this period as they show “The Editor” [Fred Dangerfield] and “The Secretary & Postcard Manager” [G Southwood] of “Pictures AND the Picturegoer”. Both can be found autographed, or not. The Editor is in the PPG, dressed as a French Artist at the Film Ball (card#62); perhaps the postcard manager lurks beneath the grandiose garb of the Answers Man (card#63). Were these used for editorial replies, or included with postcards ordered? We have never found any mention of them in the "Pictures" magazine. 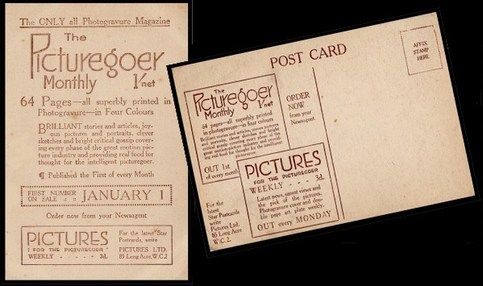 On the 27th of November 1920, issue no.354 was
re-titled “Pictures FOR The Picturegoer”.
The PPG cards do not mention this, but there
are two series of advertisement cards which do.
​The first group are full-back vertical adverts
for The Picturegoer Monthly, “first number on
sale January 1” [1921], and Pictures FOR the
Picturegoer Weekly; all are very thin cards,
more like paper than postcards. 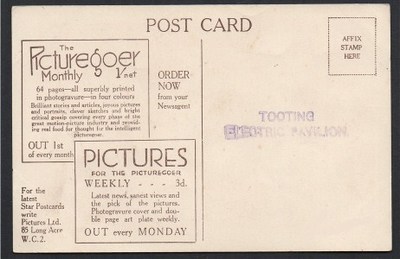 ​The second group are half-back horizontal adverts for The Picturegoer Monthly [now] “OUT 1st of every month”, and Pictures FOR the Picturegoer Weekly, some printed on  papery card as above, others on postcard stock. To the left of both adverts it says “For the latest Star Postcards write Pictures Ltd 85 Long Acre”.
​We have found one card from this section of Dustin Farnum with this additional rubberstamped advert for TOOTING ELECTRIC PAVILION. This would seem to point to a theory that these advertisement cards may have been available, or given away at cinemas. However only one card of Dustin Farnum has this additional advert, the rest are blank.
Do YOU have any cards with this particular rubber stamp, or any other cards with additional advertising ? If so we would love to hear from you - there`s a contact form at the end. 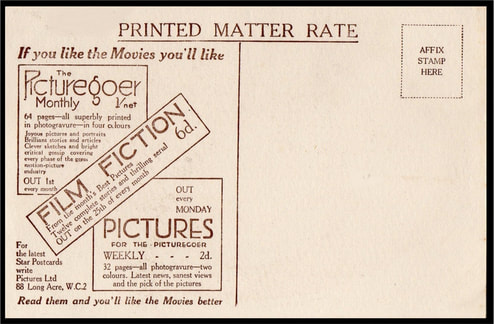 The PPG then continued, but citing 88 Long Acre on the reverse. The first group were totally new subjects, except, oddly, for two identical cards of Douglas Fairbanks at #152 and #153. Then they re-issued all the advertisement cards used at the 85 Long Acre address, all as thick numbered postcards - cards #156-173 having been the vertical ads and cards #174-9/194 the horizontal. This group included two pictures from the previous group - Mary Pickford (#144 and #181) and Constance Talmadge (#148 and #177). From card 183 a 9/ prefix was added, we believe this is to mark the 9th group issued.
Card #10/195 marks the start of the next group, all new subjects, including two “oval portrait miniatures”. All but one of these (Will Rogers) have also been found with this advert back >>
for three magazines. ​The adverts are all on thick card, and are half-back horizontal format for The Picturegoer Monthly OUT 1st of every month, Pictures for the Picturegoer Weekly OUT every Monday, [note the cost of this magazine has dropped to 2d weekly], and “Film Fiction twelve complete stories and thrilling serial OUT on the 25th of every month”. To the left it says "For the latest Star Postcards write … 88 Long Acre."
​Film Fiction was a short lived magazine, first issued in August 1921. 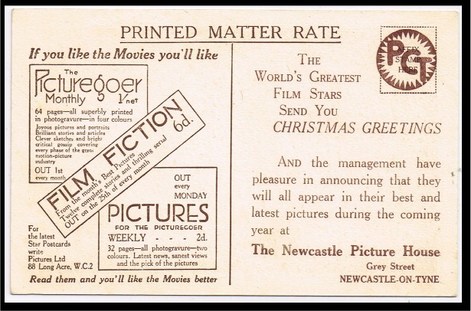 We have now come across three cards from this group with additional Christmas advertisements. The PCT logo in the stamp square is for "Provincial Cinematograph Theatres", the first national cinema chain, whose theatres featured full orchestra accompaniments, smoking lounges, and writing desks with free stationery, perhaps even these postcards on a night before Christmas?
These have so far been found on cards of Bebe Daniels (Picture House, Granby Street, LEICESTER), Eileen Percy (Newcastle Picture House, Grey Street, NEWCASTLE-UPON-TYNE) and Natalie Talmadge (Picture House, Coney Street, YORK).
The advert on the reverse of Eileen Percy (shown above) is most interesting datewise, as the PCT took over the Newcastle Picture House in 1919, and renamed it Grey Street Picture House in June 1922. Therefore these cards must date to the Christmas of 1921, The Picturegoer not being OUT in Christmas 1920, and the cinema being renamed by Christmas 1922 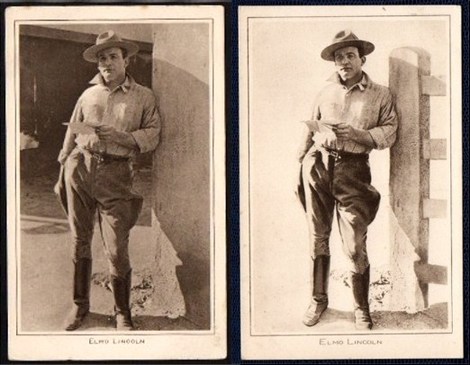 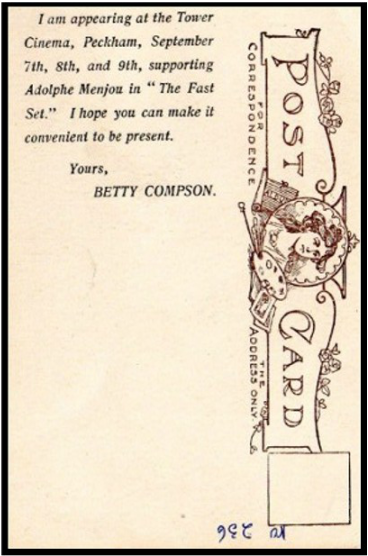 Card 11/224 is so far the highest number found in the PPG but there are a handful of similar cards with the same style back, except that the side wording reads "Picturegoer" Series 88 Long Acre London. The earliest number so far seen is card 227 (Rudolph Valentino), so if these continued from the PPG, there are two missing numbers (which could be the final PPG or the first Picturegoer cards). The highest number card so far found is 238 (Corinne Griffith), which seems a rather odd number to stop on.. why not just do two more and end on card 240 ? We do know that in 1922 "Pictures for the Picturegoer" had changed its name to "PICTURES: The Screen Magazine" but only a few months later (August) had been subsumed by its Picturegoer stablemate. We do not know when these cards were issued but one card, of Betty Compson, can be found with this additional printed advert, for “The Fast Set” at the Tower Cinema in Peckham London, a film released in 1924. Does this help to date these sepia Picturegoer cards to a year, or do YOU have this card without the advertising?
Picturegoer would go on to issue a series of larger supplements, (6 inches x 8 5/8 inches) the first group of which were advertised in May 1922 as “16 Magnificent Photogravure Portraits – The Picturegoer Portfolio Edition de Luxe”. The stars are listed in alphabetical order, but there is no mention of issuer or series number on the portraits, which are on thick cream blank backed paper with the star name printed in the border below the picture in script. Each card cost 1 shilling and 2d, but some cards still remain unseen. The second group  were listed as “Picturegoer Portfolio of Kinema Celebrities (Second Series)”, but had no list of names in the magazine and no mention of issuer or series number on the actual portraits. These were larger than the first series, (6 inches x 9 5/8 inches), but were very similar. Only eight are known. Though these supplements were issued by Picturegoer, none of us collect them; if you are interested in those, check out this weblink :  www.things-and-other-stuff.com/movies/ephemera/1921-22-picturegoer.htm
Picturegoer Magazine did go on to issue its own glossy black and white photographic film star postcards, in a huge series that ran to over 6,000 cards. Courtesy of Neil Goulding, we are proud to be able to feature a comprehensive list of these cards via this internal weblink :   Picturegoer Main Series 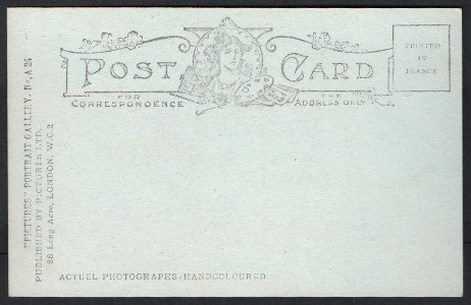 In June 1922, The Picturegoer Magazine ran an advertisement for "Deluxe Glossy Coloured Postcards of the following players..." followed by a list of names neither in alphabetical or number order. The whole set was available post free for 6/- or they could be bought individually for 3d. each. These cards are very attractive unbordered photographs, hand-painted with colour sections.. They were printed in France, which explains why the bottom wording reads "actuel photographs - handcoloured".  The numbers are prefixed with a letter “A” and they are rather scarce; some cards still remaining unseen. Until the discovery of the magazine advert these were thought to have been issued overseas, and still frequently turn up being sold by eBayers abroad; I even got one from a seller in Argentina, thrillingly with over-printing for a Buenos Aires Bookshop!
...And now an anomaly, a card which only came to light after the start of this website.
​It shows Wyndham Standing – a glossy RP bottom right of front printed with PICTURES LTD 88 LONG ACRE LONDON, reverse side printed with “Pictures Ltd. 88, Long Acre. London”, and a totally different back style without the decorative header, just simple wording REAL PHOTO POST CARD BRITISH MADE, with one header, ADDRESS ONLY.
​Wyndham Standing seems an odd choice for a single card issue, so are there any more of these that we have overlooked in our speed through the dealers` boxes, simply because they are not the standard sepia photogravure format that we have been hunting. 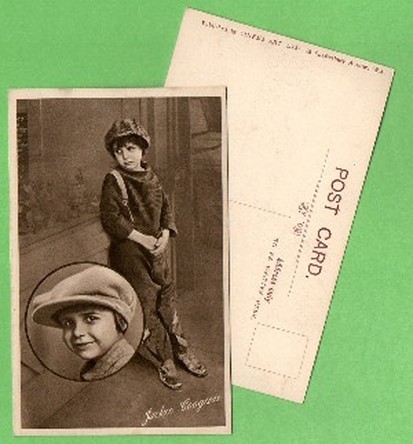 When we first started collecting the PPG, we found several cards with the same header but no issuer, which we kept for curiosity`s sake; then we hit on something very curious on eBay, which was this card of Jackie Coogan.  >
Its a card we had in "the anonymous PPG series", but here it was with a totally different back citing a company called Cinema Art Ltd, based at 25 Shaftesbury Avenue, London. We have found no record of this company, but many of their cards had advert backs, so perhaps they were involved in film promotion? Do you know them?
Once we were aware of this card we started finding others; as well as advert backed cards with no issuer, and cards with totally plain backs. There`s a lot of different backs!
See them for yourself by clicking Cinema Art & Anon PPG